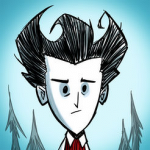 I have become the founder of this Wiki and have visited another called the Don't Starve Wiki. I have gotten badges there and I insist you visit it some time. I got badges (AKA Achievements) here and there. I've been playing Don't Starve for about a few months now and my favorite expansion is Hamlet. After using commands, it gets better. I like helping the Don't Starve Wiki and I was glad when I was able to create my own wiki. In fact, getting blocked from the Don't Starve Wiki was what motivated me do make my own. Presenting, the Video Game Wiki.

Born to go fast. Not neat.

Has a running speed of 9

So far, I'm ranked #206 with the 19 badges I've earned and 230 achievement points on the Don't Starve Wiki. My younger brother is the wizard of Don't Starve. He knows almost everything there is to know about the game.

I work on this wiki with my brother, Mysterykid1 and his friend, Gone16.

Born in the year 2000, Shadow Claw is the youngest at age 20. He arrived after a shadow hand attacked him, and his hunting group in the Forest of Creatures. It popped out of a fully black bunny they saw. It came out and took Shadow Claw and killed the rest. Shadow met Maxwell and he released him, into the woods with nothing but his hunting rifle, his jerky, and some gunpowder.

He decided that if he was going to survive, he may as well make himself a name in honor of the creature that brought him in the strange new world.

Shadow Claw can use one gunpowder to teleport to a near area, similar to the lazy explorer. He can also also eat gunpowder for 20 hunger. Although, it takes down 5 sanity. The main reason the character has gunpowder is to load the blunderbuss.

Here is the BOOK!

I am in fact writing a book about Don't Starve where Wilson gets sucked into the constant and meets up with the other survivors to try to survive and take on a pig city. I'll give a portion later on the Don't Starve Wiki.

Retrieved from "https://video-game-adventures.fandom.com/wiki/User:PvZGwchampion?oldid=4538"
Community content is available under CC-BY-SA unless otherwise noted.